IMPORTANT: All Coast guiding systems are designed to operate on low pressure plant air. Before making any adjustments, it is important to point out that there are three (3) interrelated control settings. Changing one setting, can affect the other two.

Before making any adjustments, remove the web from the guide sensor. Once the web has been removed, begin the 3-step adjustment process. There are three (3) interrelated system settings. Changing one setting can affect the other two.

How to adjust the controls settings on a Coast Controls web guide system. It's fast and easy. No electronics. No hydraulics. No Problems. 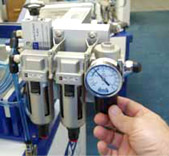 If additional shifting force is needed for guiding a large Intermediate Guide or a comparatively heavy Shifting Roll-Stand, increase the operating pressure in 1 p.s.i. increments up to about 10 p.s.i. maximum, until satisfactory movement is achieved. Changing the air pressure will require resetting the gain and/or bias adjustments.

Gain adjustment is controlled by a needle valve located in the Servo Controller’s base plate under a removable black cap. This controls the system’s frequency response through the amount of air going to the airflow sensor.

This is a sensitive adjustment and, if opened a little too far, the system will become too responsive, causing the guide to move quickly and erratically.

If the needle valve is not opened far enough, the guide will respond/move very slowly. Adjust while inserting a paper “flag” in and out of the sensor to simulate a web and observe the guide movement. The objective is responsiveness and stability.

The Bias Adjustment Knob is located on the same end of the servo controller as the needle valve. While moving a piece of paper in and out of the sensor, slowly turn the bias adjustment knob one way or the other until guide movement is detected. Continue until guide moves at the same speed in both directions.

Note: If the guide stays to one side and does not respond to the moving piece of paper, this usually means that either the bias adjustment knob or the needle valve has been screwed in or out too far and is out of its range of adjustment. Slowly turn the adjustment the other way, while using the piece of paper at the sensor to again find the adjustment range as described in steps 2 and 3.

There is an interrelationship between the air pressure, needle valve and bias adjustment knob, and when adjusting one, you may have to slightly readjust the other. Once the system is properly set, it will move smoothly and responsively with balanced shifting speed. Further adjustments should not be needed.